During the month of World Cup, there was no avoiding it. Whether you were a fan or hater, it followed you in one way or another.

The fans have probably recovered by now while those who couldn’t wait for it to end are thinking “What was the fuss anyway?”

Football has a way of revealing emotions in an admirable manner. The raw energy, excitement and heartbreak can be a sight for sore eyes. For some people, it is either a win or loss but even a curious observer like me knows that it is worth much more. The joy of seeing an underdog excel as the mighty fall (at least for me) or just watching your favourites get better and better can be gratifying.

The finesse, the stolen hearts, the adrenaline rush-all of it makes for proof that this seemingly simple sport holds a lot more than meets the eye. I am a firm believer in lessons from pretty much anything. As dark as it may sound, loss can be good for you. Perhaps it would not have been wise to say this to a player from Brazil after the 7-1 loss to Germany but well, when it is all over- you look back and start to see it. If you are lucky, it teaches you something to prepare you for the future.

That is the most I shall ever attempt to write about soccer so let me dig right into why I actually wrote this. Losses or wins, in my life that hold a lot more than meets the eye.

“Sometimes not getting what you want is a brilliant stroke of luck.”

Before 40-40  ever had office space, awards or beneficiaries, we had a dream. However, we needed space in which to sit together and throw ideas to make this dream come true. Everyone had a job or was looking for one so we set aside one evening weekly to meet and plan, you know make sense of this dream.

The first space was too small. The numbers were a bit scary even for me. To get to the bigger space enough to accommodate these numbers, we needed to pay a certain amount the next time we came. We did not return.

The next week we moved to a more spacious restaurant that had a ‘laissez- faire’ feel to it. No one really complained about our numbers, in fact the waiters and waitresses became friends. We knew them by name and they knew our orders by heart.

For one year, we met there first every Tuesday and then every switched to Thursdays.(because some of our team members had lectures) We had no qualms until one ‘fine’ Thursday when the manager of the establishment decided to show us his true wrath. It was so sad that it was funny.

He told us we were too loud yet his other clients had come to enjoy silence. He showed us these clients, a table of about 10 girls in their late teens/early twenties. They were anything but quiet but hey, what do I know. He assured us that his rent was in dollars (is 300$ ‘greater than’ 300 million UGX? He didn’t specify how many dollars so I am just asking) Many unkind word followed before he concluded by saying he did not want us to return.

The strangest thing is that on that day of all Thursday we were battling despair as an organisation and the last thing we needed was such antics. I remember even the loudest amongst us being speechless that day.

Fast forward to us ‘restaurant hoping’ in such of a new ‘home.’  We finally got one. On a random Thursday the manager calls me to inform me that he had noticed our consistency and yet there is no increase in sales. Also, do I know that other restaurants charge for this sort of thing? I told him to be straight forward. If he wanted us out, he needed to speak like a man and not beat around the bush. I was distressed but let that go.

A week later he called me aside. “I have noticed that you are a good leader and know how to mobilize people. Do you think you can help us get more clients, especially using social media?”

The rest, as they say, is history.

Several years ago I was in boarding school, I though those were the most dramatic years of my life until I grew up.

During the rainy season, so many of the girls got asthma attacks. On this particularly cold night, so many students were admitted at the school clinic and I was present because had taken a roommate.

The nurse was overwhelmed so she asked me for help. Before I knew it, I was connecting IV tubes (drips) and searching for veins. It didn’t dawn on me at the time that it was unsafe, let alone illegal. I had been around enough patients to know generally what is expected but didn’t think I would practice this ‘knowledge.

Thankfully none of the patients got a needle stuck or badly connected drip. I was in the right place at the right time with almost the right ‘experience.’  Needless to say, I have since retired from this ‘profession’ but who knows, right?

Social media is pretty pretentious. You are one person in real life and transform into the exact opposite when typing out your ‘thoughts.’ We want to impress everyone and end up losing ourselves in the process.

You share photos of ‘bliss’ on instagram to cover up for the actual depression you are going through.

We share so much information about the world outside , fill our heads with all of it but know nothing about the actual lives of people with whom we share houses, cultures, and friends.  For every perk, there are two disadvantages but hey- whether you love it or hate it, it still exists.

That is when I bring you the exception to the rule-

There are several causes that have actually benefited from social media and businesses that are flourishing by maximising the reach, access and low cost of using this platform.

I happen to have evidence 🙂 While I loathe the pretence, cyber bullying, hypocrisy (etc) that is magnified by this particular type of media- I can admit that without it 40-40 would not be where it is today.

I have actually tweeted different people about 40 days over 40 smiles. Some scrolled through and many do not even run those accounts. I am sure others did read them though CC John Legend, Michael Kiwanuka, Ellen, Bill Gates and even our very own President Museveni.

They are simply waiting for the right time to join us J Jokes aside, even with those tweets that we simply cast like a net, hoping for a big fish to put its head out, so many everyday heroes have joined us and believed with us. On July 4th, we got a call from the office of the Prime Minister thanks to #CroakAndRhyme. He read our tweets and was moved to contribute to our cause. As you can see, we are just getting started. (Waves at Hon. Amama Mbabazi) *wait till we are on first name basis-heh!*

Speaking of #CroakAndRhyme, this is actually a good example of winning and losing. Of course as an optimist, the glass will always be half full.

See, the event we had before this, which was #5AsideUG  pulled about 1200 people. We needed to at least be close to this number. We had the world cup  ‘against’ us and an obscene amount of terror threats going around.

There was only one thing we could do, have faith and give it our absolute best, and that we did.

Did you guys see Maddox Sematimba? I mean, everyone thought it was just a stunt but we surely did have him on stage- LIVE (this is repetition but it is for emphasis) He nailed it and wowed us all.

All the amazing artists who spent that evening giving their best on stage and left us in awe. We didn’t pay them a single shilling. What an honour!

After two years of 40-40, this was the best teamwork I had ever witnessed. That was a real plus!

Now we did not make the amount of money we thought we would and it was a bit difficult to explain to the beneficiaries…but…but..BUT..There was a lot to be thankful for. Some things you needed to be there to understand  (I am not saying we pulled off what some promoters can’t but…wait, I think that is what I am saying. Bye)

Getting out of your comfort zone

I went to journalism school to be able to do one thing- tell the stories no one was telling so that the readers/listeners could get inspired or at least angry/happy enough to effect change.  I knew that a by-line would be suffice and I would ensure any photographs or other information would be ‘kept’ in the background.  I did not get to practice this besides a bit of free lance work, life had other plans.

I am happier behind the scenes which is something few people believe because extroverts often relish attention. I do not.

Last week, I happened to have a profile in the New Vision.

My mom asked ‘Did you hate having your photos and information shared because you were waiting for  it on a large scale like this?” We both laughed.

The spread was quite generous, bigger than I expected. People even asked if I paid for it. Whhhyyyy? *shakes head*

I tried to be discreet with personal details, so much that the reporter even inserted his own ‘spices.’

I know that these interviews shall continue. People need to put a face to certain things, even if I have a large team and I am constantly trying to push their faces out there too 😉 Whether I like it or not, it has to be done.

It is a price that needs to be paid (as minimally as possible when I can help it) but it does have its advantages. Perhaps the next time we walk into a corporate company, they will recognise the name or a face and need little to no persuasion 🙂

I have met a few ‘strangers’ since then who were responsive. Last Friday a gentleman met us just before we went for a meeting and said he had planned to seek us out anyway. It was fate that he had bumped into us.

He mentioned three areas that 40-40 is passionate about and said he would be happy to help.

The truth is, whether he does or not, I have learnt to find joy in right now and put hope in the future.

Some promises might never materialize but at that point when you hear them, it might be all you need to keep on. 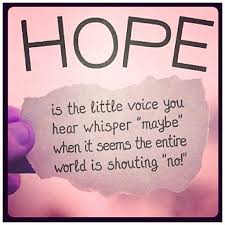 “Winning isn’t everything, but the will to win is everything.”